Lead your own army in Call of Duty 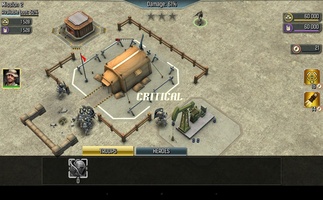 Advertisement
Call of Duty: Heroes is a real-time strategy game along the lines of Clash of Clans where you have to build your own military base and direct some of the most charismatic characters from the Call of Duty franchise.

Gameplay in Call of Duty: Heroes is virtually identical to the aforementioned Clash of Clans. That is, you have to manage an operations base where you can build all kinds of buildings, such as oil depots, gold depositories, machine-gun bunkers, and barracks where you can recruit soldiers.

From your headquarters, you can recruit lots of different soldiers and even some heroes like Captain Pierce, Soap, and Ghost. And from here you'll also have to dive into the different missions that make up the Call of Duty: Heroes story mode.

In these missions, you'll have to attack enemy bases, deploying your troops to strategic locations. You can also directly control your heroes and even get a first-person perspective when shooting from a helicopter.

Call of Duty: Heroes is a good strategy game that, while not necessarily unique within this saturated genre, does provide a fun experience for fans of the Call of Duty franchise.
Reviewed by Andrés López Translated by Taryn
Advertisement

Why is this app published on Uptodown?
(More information)

And the game will start. There is no play market

We are waiting for the update 1.6.0 please put it quickly Oct 3rd, 2018 LEAK: screenshots and gameplay of the new Call of Duty for Android Similar to Call of Duty: Heroes

100 DAYS - Zombie Survival
Survive the tireless hordes of zombies
Way of Retribution: Awakening
An RPG like Dark Souls for Android
Guess the Logo
Guess what these logos represent
Romancing Saga Re: univerSe (JP)
A new chapter of the Romancing Saga
Candy Charming
Combine candies to discover magical kingdoms
Beat Slash
Dawn of Dynasty
Expand your territory and repel attacks
Wonderpants Rocky Rumble
Get thrown and destroy everything in your path